How Can We Help You?
"Service All About YOU!"
Experienced
Trustworthy
Professional
Respectful
100% Satisfaction
Go Back

Need to get your drains cleared? 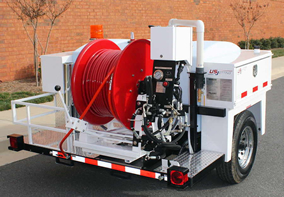 Ever since professional plumbers have been doing their work duties, by fixing clogged toilets, sinks, and drains, they often used a tool known as a plumbing snake to take care of the problems within these drains. Although this was often the common procedure, a better means of unclogging drains known as hydro jetting was introduced. Professionals tend to use this method more because it produces powerful and lasting results, removes extra debris, and negates the use of chemicals.

The technique known as hydro jetting used by professionals, bears close similarities to power washing, in that, they release a strong stream of water to remove troublesome substances or obstacles. Many hydro jetting machines have adjustable gauges which allow the plumber to set the strength of the water spray. The water blasts can be anywhere between 2,000 and 4,000 pounds per square inch.

This allows them to remove problematic substances like grease, hair, minerals, and many other built up things, hurling them through the drain and clearing it. However, before a plumber decides to actually perform a hydro jetting routine they will inspect the drain with a small camera to pinpoint the source of the problem. This also informs them if your drain is broken or weak.

What sets hydro jetting apart from the traditional plumbing snake method is its ability to tackle more things than just regular drain clogs. As mentioned earlier, the jet spray is powerful enough to remove excess grease and other materials that have built up over time, however, it is also powerful enough to break up tree roots as well. Most importantly, when you allow a professional to perform a routine hydro jetting to your drains, it will improve the overall health of the pipes. This is because due to the power of the jet, your plumber will not have to rely on harsh chemicals to break anything up.

The thin line that lies between traditional and modern plumbing techniques are apparent with the introduction of hydro jetting. Your drains will be unclogged faster and more efficiently which will preserve their use a lot longer.

Need to hydro jet the drains in your Tacoma home? Call All Purpose Plumbing at (253) 473-5100 and schedule a service call today!

How Can We Help You?
Why Choose Us
Testimonials

"This was the best experience I have ever had with a plumbing company. Well worth the minor service call fee to help us diagnose our problem. Will definitely use them again!"

"Friendly, professional, on time, reasonably priced and quality work completed in a timely manner. They answered all questions I had about the job they came out for as well as future projects."

"I found Gene to be a very personable yet professional individual. He listened to me and told me the best way to deal with my requests. I'm looking forward to working with Gene."

Plumbing problem solved right the first time! Why Work With US?

You’ll see that our motto “Service All About You!” is really how we treat each customer. We take pride in having the best trained plumbers in Tacoma. Due to our intensive training program, each plumber becomes proficient in completing every task to your utmost satisfaction. For your peace of mind, our plumbers are drug tested and background checked. We are very confident you will love our service like the many satisfied customers who we serve each and every day.
Satisfaction Guaranteed

We back all of our work with a 100% satisfaction guarantee. If you’re not happy, either are we and we will do everything we can to resolve the issue.

Your time is precious and we know it! That's why we drive vans fully stocked with inventory, once we arrive we take care of your job right then and there in most cases.

With years of experience delivering the highest quality service available to hundreds of happy customers, All Purpose Plumbing has become a leader in the industry.